Skip to content
Home » 9 Famous Archers in Greek Mythology: Who Are They? 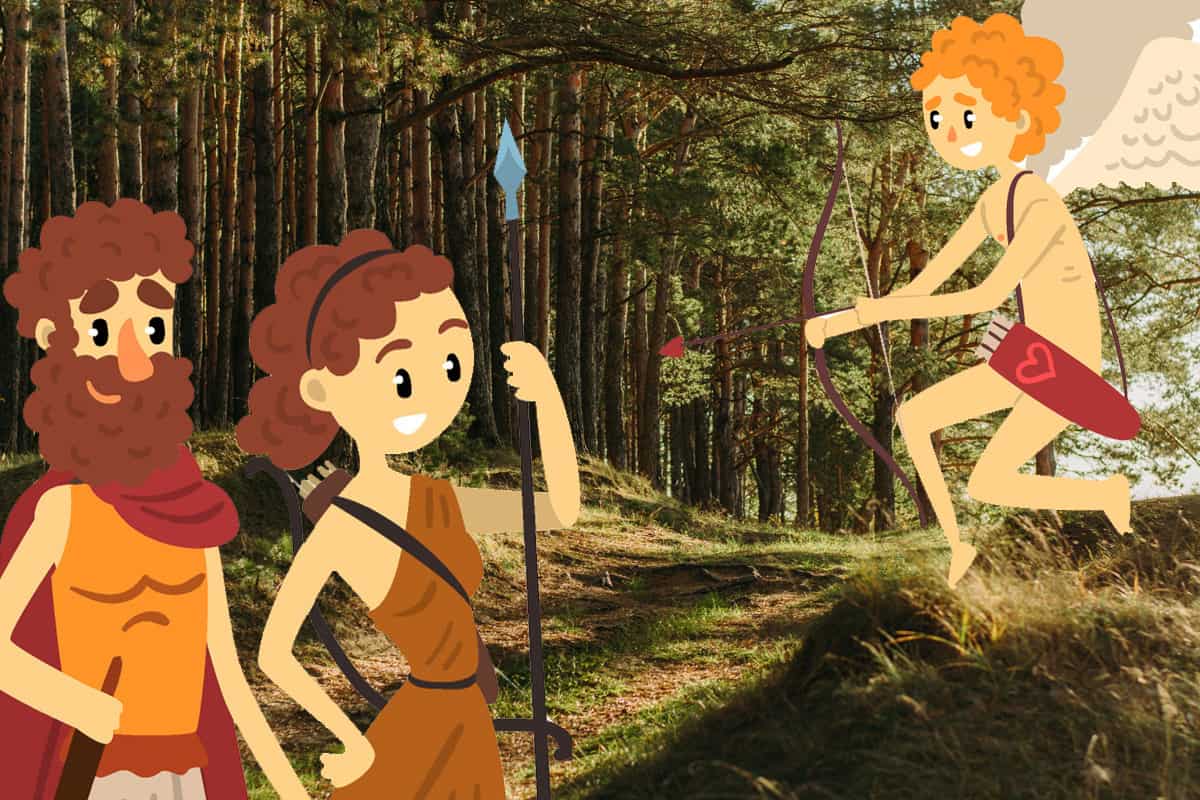 In Greek mythology it is often the swordsmen that get a lot of the glory, however there are also many great and famous archers.

They were very important in many of the events and stories that took place. Archery was a highly prized skill in ancient Greece and so it makes sense that Greek mythology has such interesting champions. So, without further ado, here are the most famous archers in Greek mythology.

The Most Famous Archers in Greek Mythology

1. Philoctetes – A Prophecy of Troy

Philoctetes was the son of Poeas. It was said that Poeas was one of the famed Argonauts. Philoctetes himself, was a skilled archer who was incredibly important in the ending of the Trojan War.

Poeas was close friends with Heracles, and when Heracles chose to die, it was Poeas who built his funeral pyre and burnt his body. As payment, Heracles gave Poeas his bow and some Hydra blood tipped arrows. These weapons were then passed onto his son Philoctetes when he died. Later Philoctetes would become King of Malis and would be called upon in the great war against the Trojans. Philoctetes sailed for Troy and stopped on the island of Lemnos to rest. He accidentally scratched himself with the poisoned arrows, and his companions ruthlessly left him on the island.

After 10 long years of fighting the Trojans, the Greeks got wind of a prophecy that the war would not end until the bow of Heracles had been fired. So Odysseus and Neoptolemus went back to Lemnos to fetch Philoctetes. Philoctetes had spent many years perfecting his skill for archery, and he was happy to join them. He returned with them to Troy, and during one of the battles, he spotted Paris of Troy, the primary cause for the war, and fired an arrow and killed him. 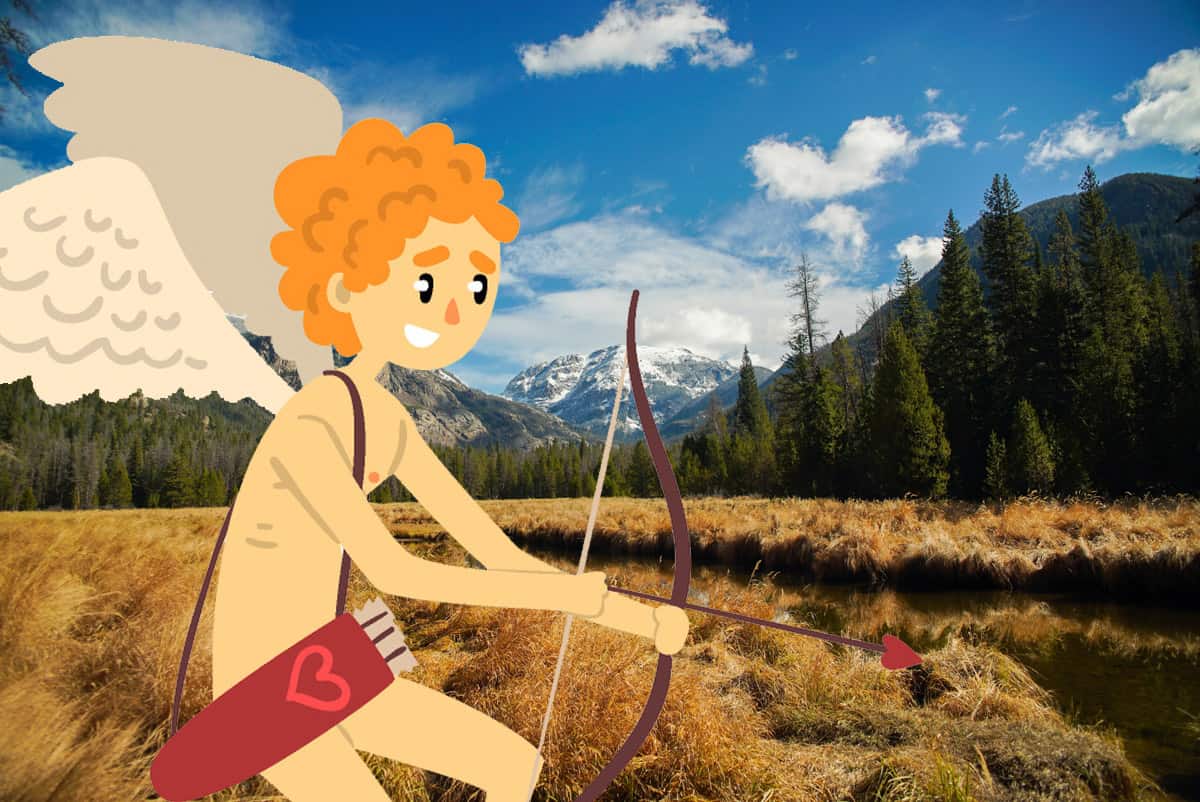 Eros was the son of Zeus and Aphrodite. He is known as a famous archer and the god of love.

Apollo argued with Eros about whose weapons were better. To prove that he had the better weapons, Eros shot a special arrow at Apollo. It struck Apollo’s heart, and he ended up falling in love with Daphne. But Eros also shot another special arrow at Daphne, which made her not interested in Apollo. She ended up asking her father for help, and he turned her into a tree. Apollo was not happy, but he still loved her and ended up worshipping her for the rest of his life.

Eros was responsible for many love connections made with his arrows. He was very close to his mother, Aphrodite, who used him to either reward or punish those she knew. One day Eros decided to disobey her over something and ended up scratching himself with one of his own arrows. The scratch caused him to fall in love with Psyche, who he ran off to marry even though Aphrodite was entirely against it.

Orion was the son of Poseidon and Euryale. He was said to be an extremely handsome giant who was also a great hunter of both animals and women. He also is known as the constellation Orion.

Orion was known to be a giant and a hunter. He was capable of walking on the bottom of the sea with his head bobbing above. It was said he had pursued the seven daughters of the Titan Atlas. The pursuing led Zeus to turn all the daughters into stars so Orion would be unable to catch them.

Orion pursued Merope, but her father Oenopion didn’t want to give her up. He made a deal with Orion that he could marry Merope so long as Orion killed all the beasts in Chios. He ended up completing the impossible task. Her father was furious at Orion’s success, so he gave Orion a sleeping potion, poked out his eyes, and left him blinded on the beach. A gull told Orion he could get his eyesight back if he travelled east and stared into the rising sun. He ended up getting his eyesight back, marrying Merope, and taking her away from the island.

Chiron was a friendly centaur who was an expert in music, caring for animals, healing, and archery. He was also a great teacher.

As an infant, Jason was sent to Chiron to be hidden and raised by the centaur until he was old enough to return and claim his throne. Chiron was also put in charge of the education of Achilles, Heracles, and Asclepius.

The Erymanthian Boar was a horrible creature who wandered around Arcadia. Capturing the boar was Heracles’ fourth task. On his journey, Heracles met the centaur, Pholus. They were attacked by centaurs who were enemies of Pholus. Heracles fought by Pholus’ side, shooting arrows left and right. One of his arrows ended up hitting Chiron, who had been his former teacher. The arrow ended up killing Chiron, which angered Heracles. Heracles ended up capturing the boar who was then put in a bronze cage.

5. Atalanta – A Warrior Raised by Bears

Atalanta was the daughter of Iasus. She was abandoned at birth and raised by bears. She was known to be a great huntress and a virgin.

A wild boar was sent by an angry Artemis to destroy Calydon. A boar hunt was put together by Meleager. Atalanta was Meleager’s lover.

Atalanta participated in the boar hunt where she shot the first arrow that hit the beast. But it was Meleager who killed it. He gave its hide to Atalanta, which angered his uncles. His mother ended up killing him.

Atalanta was not willing to take anyone else for a husband because she had fallen in love with Meleager. To get out of having to marry someone, she said she would marry the first man who could beat her in a foot-race. Hippomanes asked Aphrodite for help in winning the race. She gave him three golden apples. Each time he dropped an apple, Atalanta would stop to pick it up. He ended up winning the race and marrying Atalanta. Hippomanes didn’t thank Aphrodite for what she had done, so she ended up turning Hippomanes and Atalanta into lions. 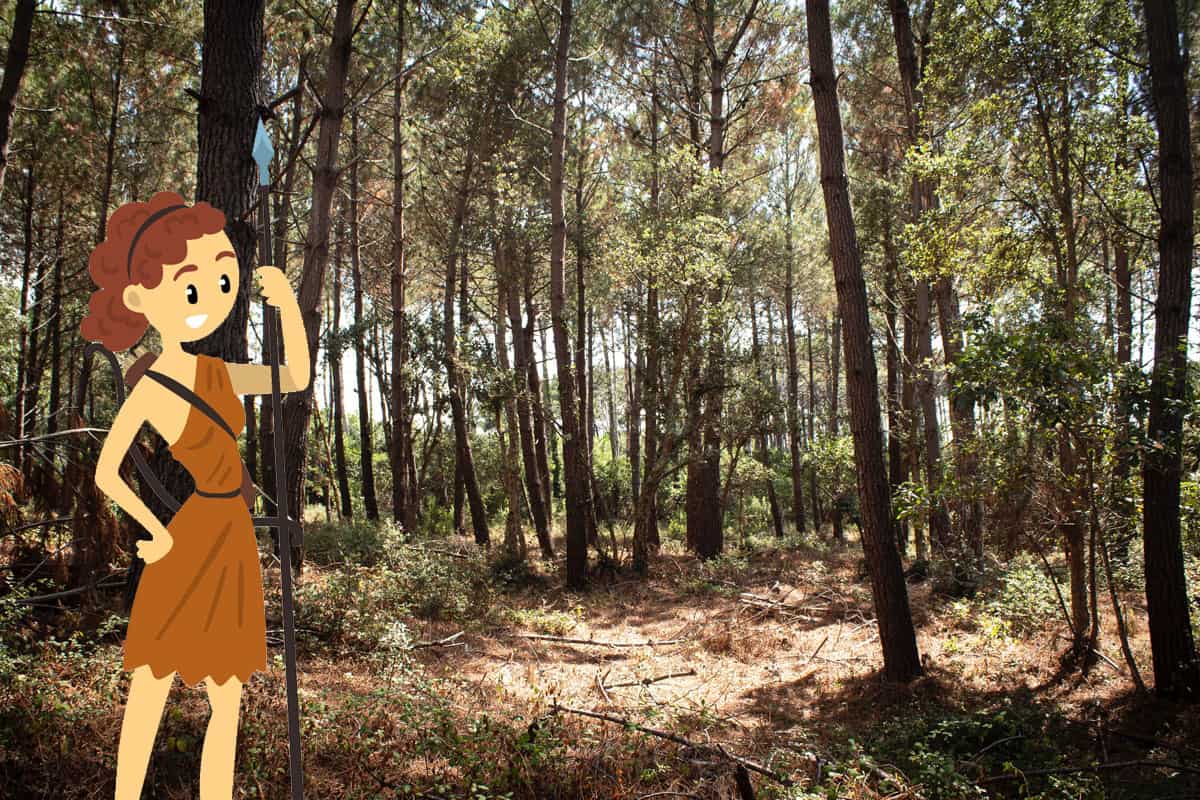 Artemis was the daughter of Zeus and Leto. She is known as the Goddess of hunting, archery, and wild animals. She was also the twin sister of Apollo.

Artemis was known to be a vengeful God, and many of her “helpful antics’ led to tragedies. Actaeon witnessed her bathing naked. She turned him into a stag as punishment. His dogs believed he was a stag and not their master, so they ended up killing him. Artemis was also the God Agamemnon sacrificed his daughter to get good winds for his sail to Troy. His act of sacrifice caused his wife Clytemnestra to kill him when he returned from attacking Troy. It was said Artemis was also responsible for giving Cephalus’ wife a magic spear and great hunting hound. He ended up killing her with the spear by accident.

Orion fell in love with Artemis, which made Apollo very jealous and angry. He was used to having his sister’s attention all to himself. Apollo told his grandmother Gaia that Orion was killing all of her animals. Gaia sent a scorpion after Orion, but he escaped it by jumping into the sea. Apollo wanted Orion dead and out of the picture. He convinced Artemis that the head seen above the water was an enemy’s. Artemis took out her silver bow, strung it, and sent the arrow straight through Orion’s head. When she realised who she had killed, she brought him back to life and made him immortal. She put him in the vault of heaven, and he was left to wander the starry sky pursuing his dreams.

Aphrodite told Helen she would be abducted by Paris and taken to Troy. She taught Aphrodite everything she knew about seduction and love. Because Helen was already so beautiful, when she made it to Troy, Paris’ brothers all fell in love with her, and no one was willing to give her up to avoid war. It was also said that Paris stole Helen away from Menelaus and married her in Troy. This angered Menelaus, so he and Agamemnon initiated the Trojan war to get her back.

The apple of discord triggered the events of the Trojan war. Zeus gave the apple to Paris. Aphrodite wanted the apple for herself. She told Paris she would give him Helen if he gave Aphrodite the apple. He agreed. He went and abducted Helen, and thus began the Trojan war. It was said that Eros shot a special arrow at Helen that caused her to fall in love with Paris. 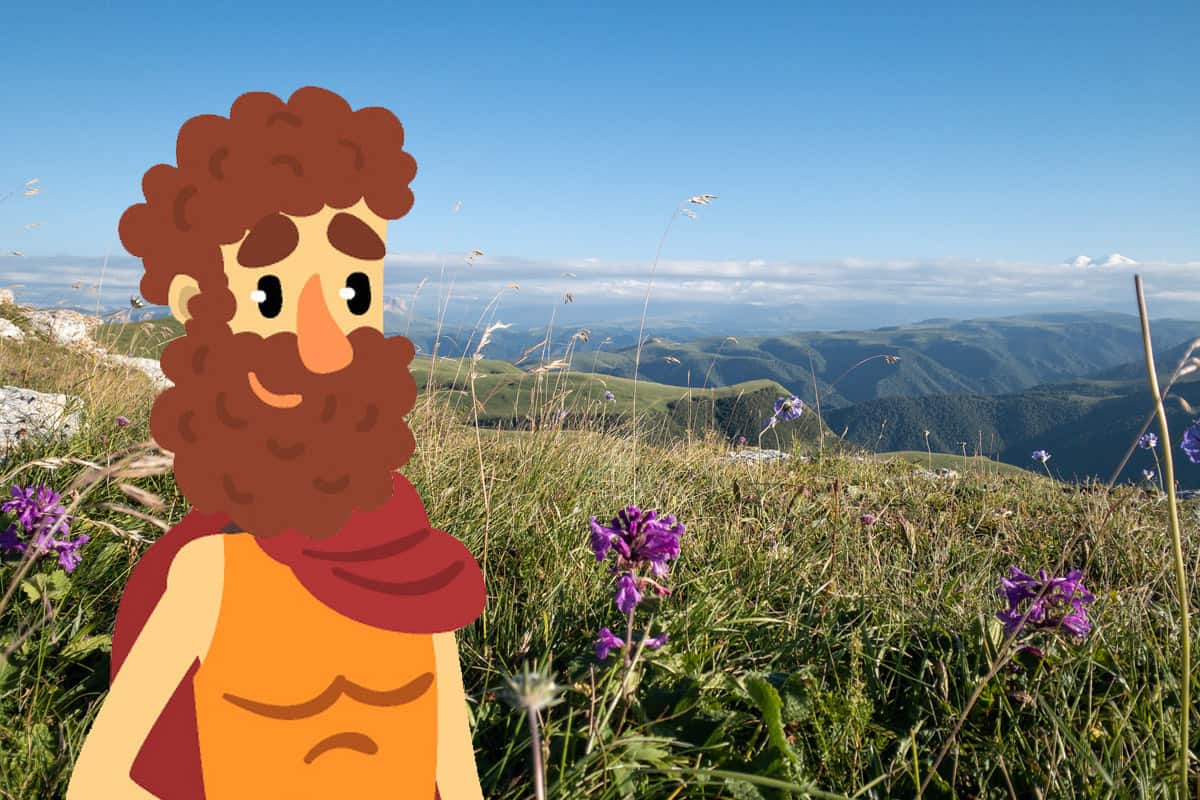 Teucer was the son of Telamon and Hesione. He was known to be a very skilled archer. He was also a King of Troy.

Teucer told Dardanus he should marry Teucer’s daughter Batia. He gave Dardanus part of his kingdom. Dardanus ended up naming it, Dardania. Eventually, he inherited the rest of the kingdom. Generations later, the city of Troy was founded in Dardania.

Teucer fought in the Trojan war and was one of the people inside of the Trojan horse. Teucer’s brother, Ajax, had committed suicide because he was cheated out of Achilles’ golden armor by Odysseus. Telamon blamed Teucer for allowing it to happen. His father would not allow him to renter Troy. Teucer ended up leaving Troy behind and sailing to Cyprus. He founded a new city called Salamis.

Actaeon was the son of Aristaeus and Autonoe. He was a famed hunter and bowman.

One day, Actaeon was out hunting. He got thirsty and decided to stop at a grotto for some water. Actaeon witnessed a woman bathing and watched her intently. The woman was actually the Goddess Artemis who was also known for her amazing archery skills. She was outraged when she noticed she was being watched. She turned Actaeon into a stag as punishment for the intrusion. Actaeon’s dogs ended up attacking him and ripping him to shreds because they thought he was a stag and not their master.

So there you have the most famous and greatest archers in Greek mythology. These characters were important in the Greek myths and their skill with the bow was famed across the land.

I hope you enjoyed the list, if you have any comments then please let us know below. Thanks!

Bonus – The Myth of Cupid and Psyche