Skip to content
Home » Anubis and Osiris: What is the Difference? 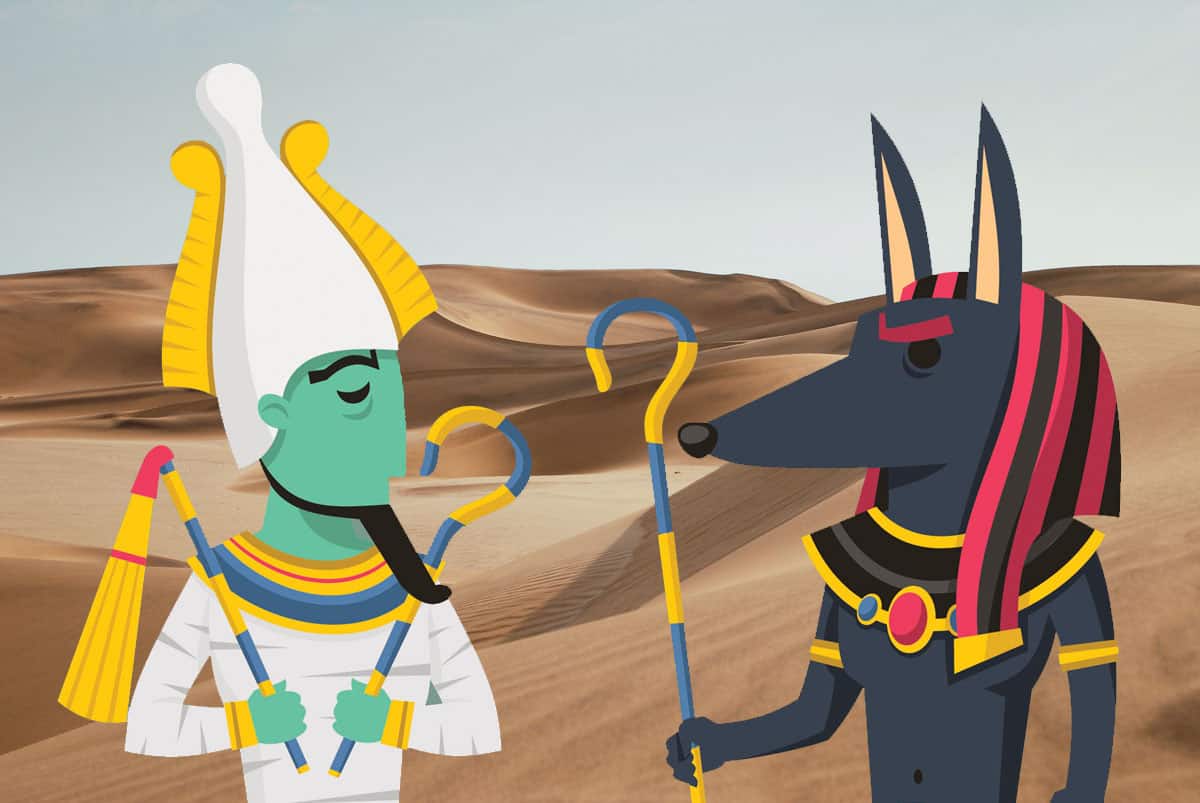 Anubis and Osiris were the two most famous Egyptian death gods. They were uncle and nephew and, depending on the myth, also father and son.

Though these two gods were gods of death, their roles were different. Osiris was a ruler who judged souls and took care of the underworld as a whole. Anubis, meanwhile, was a protector and a guide, and his main job was as a sort of ferryman for the dead. While Osiris personified grace and strength, Anubis’s main defining features were his loyalty and dedication. However, the two shared a benevolence and respect when dealing with the dead, and neither was afraid to unleash anger when things were not as they were supposed to be. Both shared a love for order.

What’s the difference between Anubis and Osiris?

Anubis was the son of Nephthys, who was also Osiris’s, Set’s, and Isis’s sister. Nephthys was married to Set; however, Anubis was fathered by Osiris and raised by Isis, his aunt. Both his parents and his aunt and uncle were children of Nut and Geb, who were, in turn, Shu and Tefnut’s children. Atum, who was Shu and Tefnut’s parent, was the first being.

Anubis had one full brother, Wepwawet; however, since Osiris was his father, Horus was his half-brother.

There are some earlier versions in which Set was actually the one who fathered Anubis, as well as others in which Ra was his father.
Anubis had a female equivalent, Anput. She was also his wife, and they had a daughter, Kebechet.

Osiris was married to his sister, Isis. They had two other siblings, a brother, Set, and a sister, Nephthys. Set and Nephthys were also husband and wife. These four were the fourth generation of world beings. Sometimes a fifth sibling is mentioned, whose name is Horus the Elder or Her-Ur.

There are some variations in which Osiris’s great grandfather was Ra instead of Atum. Sometimes there is mention of a grandmother, Iusaaset, who was also Atum’s hand.

Osiris is always mentioned as Horus’s father, but he is also Anubis’s father in some accounts. He also has a step-daughter, through Isis, Bastet, who was fathered by Ra. He was father-in-law to the goddess. He also had a grandson, the music god, Ihy, through Horus’s marriage.

Nephthys, Anubis’s mother, was Osiris and Isis’s sister and wife of their villainous brother Set. When Anubis was born, Nephthys was afraid that his life was in danger, so she hid him in the marshes. That was probably because he was illegitimate. Isis rescued and protected Anubis. Both sisters raised him without any hostility arising between them as a result of the affair between Osiris and Nephthys.

Anubis’s domains were as a guardian of cemeteries as well as a god of mummification. He is always portrayed with a doglike head and a human male body, and he holds a flail or a whip. His job was to protect the dead while on the way to the afterlife, as well as the mummies in the tombs.

Anubis was one of the most remembered gods, and a reason for that is because of his role in the myth of Osiris. Following Osiris’s death at the hands of Set, Anubis was the one who embalmed him and protected him.

He lived in cemeteries, and apart from making sure the dead made it safely to the Netherworld, he was also sometimes attending the ceremony of heart-weighing in the Hall of Two Truths. If someone was deemed worthy, then Anubis would prepare them for their journey to the spirit world.

The jackal-head god was very methodical, and anyone that messed with the order would receive punishment. There is one myth where Set, disguised as a leopard, tried to approach Osiris’s body, and Anubis chased him with a hot poker; supposedly, this is how the leopard got its spots. Afterward, Anubis skinned the leopard-Set and donned his fur as a coat.

While Anubis wasn’t evil, anyone who was out of line in the Underworld would be disciplined by his messengers. The messenger demons tormented and persecuted anyone who didn’t behave in a righteous manner while on their way to the afterlife.

Osiris was the one who introduced agriculture and wine to the humans. He was believed to be ‘eternally good’ and constantly benevolent. Inarguably, the most prominent myth about him has to do with his longstanding war with his brother Set.

Isis was pregnant during Osiris’s funeral, and Osiris didn’t meet his son until after Osiris was resurrected. Isis made sure to imbue a deep love for his father in Horus’s heart, which was possibly what ultimately led him to challenge Set.

Osiris came back to life with Isis’s help. After all of his body parts were collected and reassembled, it was discovered that Osiris’s phallus had fallen into the river Nile and was consequently swallowed by either a crocodile or a fish. Isis then made for him a new phallus.

He was one of the most esteemed and influential of the gods. He became the primary god of resurrection and death as well as a god of the Underworld. He was also in charge of judging the souls that came to the Underworld and testing their worth for their next life.

When Osiris’s son Horus challenged his uncle, Set, to avenge his father’s murder, they ended up in what seemed to be like an eternal battle. In the end, Osiris emerged from the Underworld. He demanded that they stop, or he would release all the Underworld demons on earth. Horus became king of the earth following this.

Anubis and Osiris were both gods of the dead. Still, due to the importance of death and resurrection in Egyptian myth, this didn’t make them or their roles entirely similar. While Anubis was a guard and a shepherd of souls, Osiris was a ruler and the god of rebirth. Both gods existed in a seamless cohesion to ensure that the deserving dead made their way from death to new life.