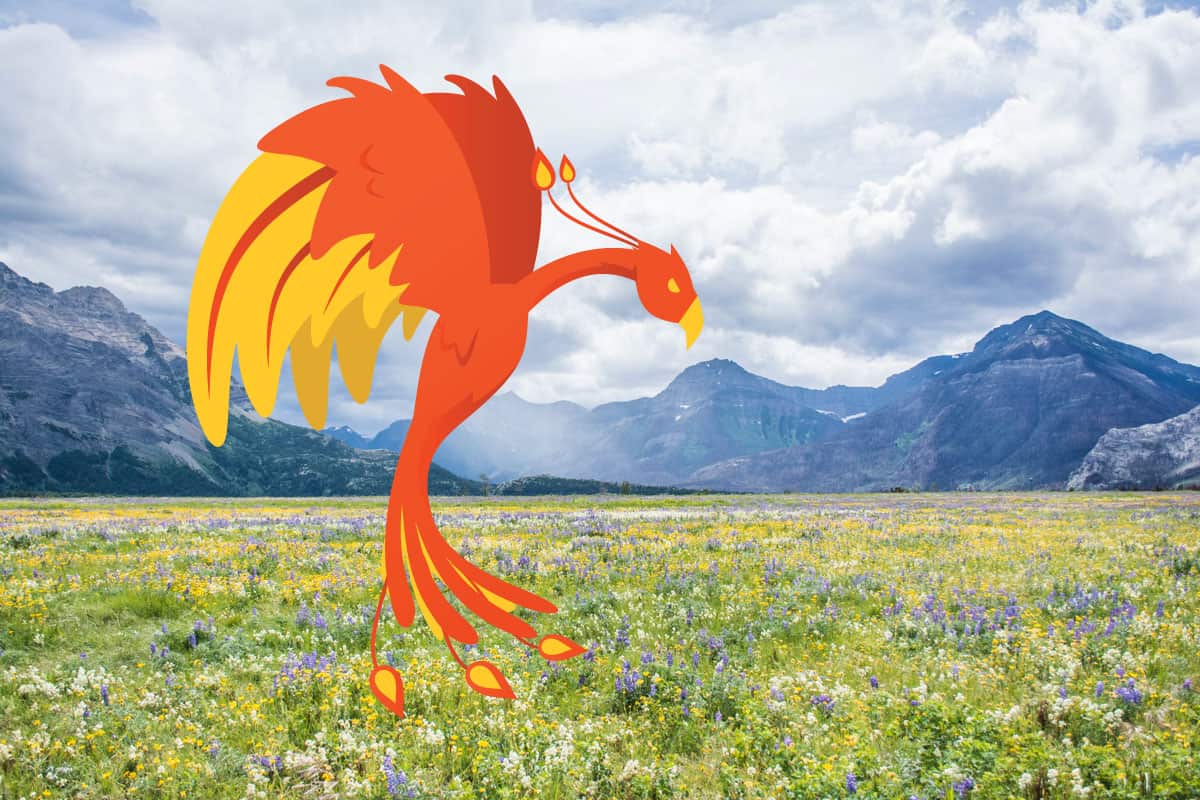 The phoenix is a legendary Greek bird who dies and is reborn from flames. As well as Greek mythology, several similar species exist throughout folklore around the world. It’s associated with the sun and rebirth and is therefore an important symbol of the circle of life and regeneration. Because of this, it is often used as a symbol in Christian allegories as well.

Herodotus placed the origin of the phoenix not in Greece, but in Egypt. Of course, with the interacting cultures between Ancient Greece and Ancient Egypt, it’s likely the Egyptian version was heavily influenced – a rebirth, if you will. Whatever the source, here are some facts about this brilliant bird.

A Few Facts about the Phoenix

The halo showed its connection to the sun, much like the solar disk worn by many Egyptian gods. The halo often had seven rays, matching it with Helios, the Greek personification of the sun.

2. It is always portrayed as a large bird

3. According to Chiron, the wisest of centaurs, the phoenix was not immortal

In a lesson to the hero Achilles, Chiron taught him that the phoenix did not live forever, but it seemed like it to humans; its lifespan was nine hundred and seventy two times the span of an average human.

4. Several colors were associated with the phoenix

The word phoenix likely came from Phoenician, which itself was probably linked to the purple-red dyes used by that culture. The name of the bird probably meant either “bird from Phoenicia” or “purple-red bird”. Other colors associated with the phoenix are:

Even though there was no consensus on the bird’s appearance, everyone agreed that it was beautiful, colorful, and vibrant, distinct from any other bird.

5. In Gnosticism, there were three phoenixes in paradise

A creature born of a phoenix would become a human being.

6. Dante Alighieri described the phoenix as living five hundred years before its rebirth

Dante’s phoenixes did not eat earthly food like grain or seeds. Instead, they lived entirely on incense and cardamom.

7. Phoenixes are very popular in heraldry

From the Middle Ages onward, phoenixes were used in the crests and shields of British nobles. In more modern times, they are used on several flags and emblems including:

In the Hindu, Buddhist, and Jain religions, the garuda is the king of the birds associated with the sun and courage. The flap of his wings can stop the movement of the heavens, and he was a god born of a human woman.

In Slavic mythology, the firebird is a burning bird who simultaneously blessed and cursed anyone who captured it. Just one of its feathers is enough to set a big room on fire, and it exudes beauty and light.

The Arabic anqa is an always-female bird who resides where the sun sets. Her plumage is glorious to behold, and she bears some resemblance to every being that ever lived. She lives for thousands of years and gives wisdom to those who seek it.

The giant Turkish konrul is a large bird who can carry off an elephant. She can regenerate and be reborn whenever she dies. She is a peacock-like bird with a dog’s head. Burning her feathers can bring her aid.

In China and Japan, the fenghuang (Chinese) or hō-ō (Japanese) is known as the Chinese phoenix. It is a bird that is both male and female, paired with dragons. Its head is the sky, and its eyes are the sun. It’s often associated with fire, and it brings peace and tranquility. It was also a symbol of noble houses.

The Ancient Egyptian deity Bennu, who may have been inspired by or the inspiration for the Greek phoenix, was a self-created shining bird who was a deity of the sun, creation, and rebirth. He was worshipped at Heliopolis, the sun-city.

9. In many tales, the phoenix knew when its death was imminent.

It would build a nest for itself from herbs and spices that would be fragrant when burned, then settled there to die. From the flames of its corpse, an egg would arise – its child, but also itself. From that egg, the phoenix would hatch anew. Sometimes, it instead emerged as a worm (instead of an egg) that would grow into a phoenix.

10. Some stories hold that there was only ever one phoenix at a time

The same bird was born and reborn over and over again. Others told of the phoenix as a whole species.

11. Most stories hold that the phoenix spent its life in Arabia

When it was time to die, it would fly to Heliopolis in Egypt to make its nest and die then become reborn once again.

The reason that the phoenix remains so popular is simple – as humans, we’re all fascinated by the cycle of life and death. To live and die, and be reborn again, is magic.