Skip to content
Home » Sirens vs Mermaids: What is the Difference? 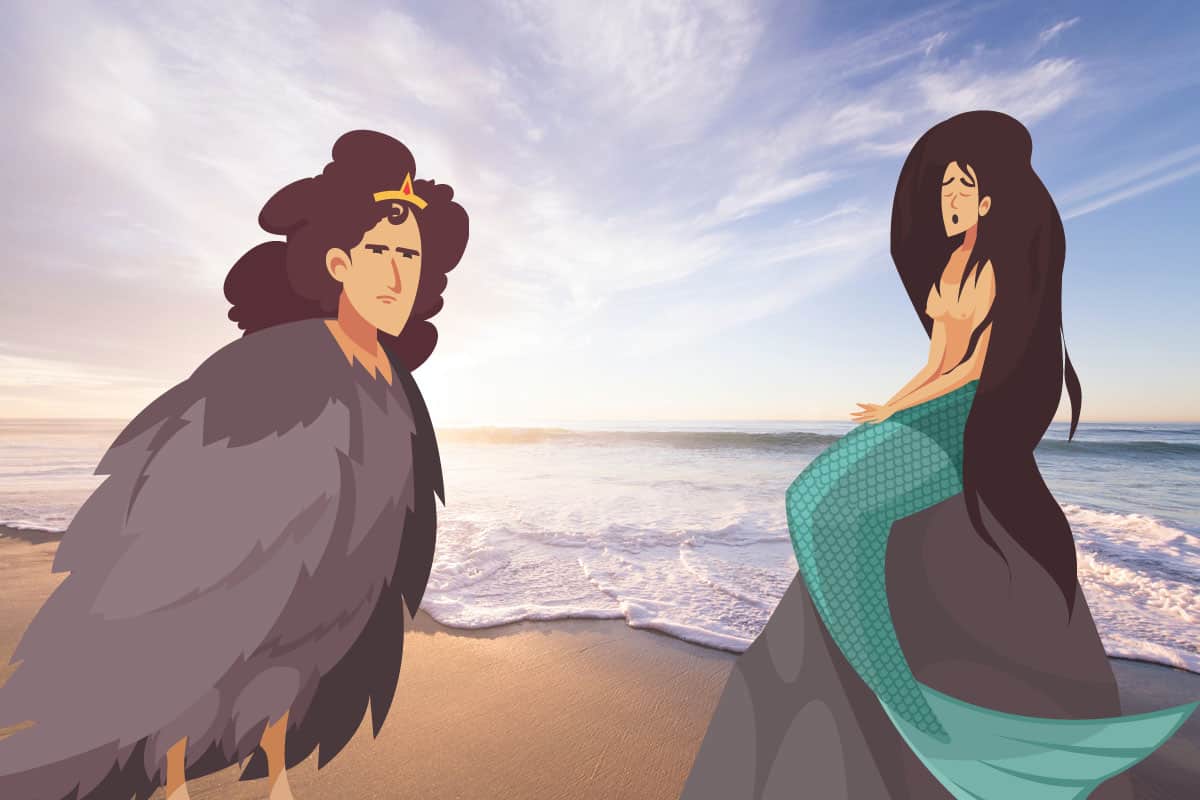 Today, sirens and mermaids are commonly used interchangeably to reference beautiful women of the sea. In truth, however, these two half-human creatures of legend represent two distinct and very different myths.

Siren and mermaids exist as mythological foils to one another. Half-human, half-bird, sirens are evil seductresses dwelling on rocky islands whose sweet songs lure sailors to their death. Half-human, half-fish, mermaids are underwater maidens famed for their beauty, equally tempting but largely regarded as friend – not foe – to humans.

A creation of the Classical Greek era, the siren’s song is said to contain powerful, otherworldly knowledge, and few have survived an encounter with a siren. Meanwhile, mermaids (and their male, mermen counterparts)  populate myth and legend all around the globe, often intermarrying with mortals and producing offspring.

Despite their godly origins, just how different are mermaids and sirens, and how did these two tales become so interwoven?

So, What is the Difference Between Sirens and Mermaids?

Sirens are exclusively a creation of Ancient Greek mythology. In Greek myths, sirens are either daughters of the river God Achelous or offspring of the sea god and goddess Phorcys and Ceto. It should be noted that Phorcys and Ceto are also parents to Scylla and Charybdis, two famed monsters of Greek mythology and sisters of these original sirens. This association likely contributes to the characterization of sirens as evil and dangerous.

Mermaids, on the other hand, appear in global mythology, spanning the continents of Europe, Asia, and Africa. Earliest tales of mermaids appear in Ancient Babylonia, dating back to 1000 BC with the story of Atargatis, a woman who tried to drown herself while mourning the loss of her husband but was instead transformed into a mermaid by the powers of the sea.

The mermaid as she is often depicted in the West, however, also originates from Greek mythology. In Ancient Greek lore, mermaids are the children of sea gods and nymphs – nereids. Their benevolent nature and beauty are attributed to their mothers as both sea and water nymphs were famed for their looks.

Sirens are half-human, half-bird, with a woman’s head and the body of a bird. They have bird feathers, wings, and taloned claw feet. Physically, they resemble the harpies of Greek mythology. It was not until the Middle Ages in Europe that sirens began to appear in art with the more fish-like attributes of a mermaid, such as a tail, while. This change in appearance is theorized to be related to the rise of Christianity, where wings were associated and tails with serpent creatures of evil.

Mermaids are half-human, half-fish creatures, with the upper body of a human fading to the scales and tail of a fish. Mermaids are famed for their beauty, though what is defined as beauty varies from culture to culture. While sirens are exclusively female, mermaids have male counterparts, often referred to as “mermen” or “Tritons” (sons of Triton, a famed sea God).

One of the other starkest differences between sirens and mermaids is where they can be found. Sirens are above-land dwellers, living on rocky islands in the ocean. Mermaids are true creatures of the water, living underwater in oceans, seas, rivers, springs, lakes, and waterfalls. However, as they often marry humans, they possess some ability to live on land.

Sirens are the quintessential femme fatale of mythology. They are wicked and nefarious temptresses famed for their singing. Sirens’ mesmerizing, beautiful songs are infamous for luring sailors and their ships to crash on their rocky shores. Some myths also reference sirens as escorts of dead souls to the underworld. Sirens are said to possess secret or powerful knowledge, which is part of the reason their melodies are so enticing and unable to reist. The word siren, in fact, comes from an ancient Greek word “seirḗn”, which traces back to root words meaning either singing or cord/tether.

Mermaids are sirens’ counterparts in the Western world. They are kind, benevolent, and above all, possess unparalleled beauty. Though they, too, are characterized as seductive and tempting, they are not portrayed as nefarious creatures who seduce to cause harm to humans. Mermaids have a peaceful relationship with humans, either falling in love with them, often producing children, or avoiding them as shy and demure beings. The word mermaid is derived from the words for “sea” (mere) and “maid”, a girl or young woman associated with beauty, youth, vitality, and innocence.

However, mermaids in other non folklore are not necessarily so innocent. In Africa, the “Mami Water” or Mother of the Water, were often ruthless creatures who unleashed havoc. In Asian legends, they are mysterious spirits. In folklore of some sailing peoples, they could be unlucky omens indicating – and often provoking – storms or disasters. Slavic lore tells of Rusalkas, who share the commonality of restless spirits of young women who die in violent, tragic, or unnatural ways, such as drowning.

Mermaids did not become associated with musicality until the Middle Ages, around the same time that their folklore became assimilated with those of sirens. As daughters of nymphs, known for singing and dancing, their prowess for instruments and singing is easily associated. The popularization of Disney’s adaptation of The Little Mermaid serves to imprint this association on popular memory.

Sirens are most known for their appearance in Homer’s The Iliad, in which Odysseus and his crew of men are tempted. Odysseus, curious about the fabled songs, has his crew stuff their ears with beeswax so that they are not tempted and row to safety while Odysseus himself is tied to the mast and able to hear the sirens. Sirens also appear in the Argonautica, the Greek telling of Jason and his crew’s travels aboard the Argos. IIn the 7th century Anglo-Saxon chronicle Book of Monsters (Liber monstrorum), we encounter the first fish-like siren.

One of the most famous modern day sirens is just as well-known, if perhaps not as easily identified. The Seattle-based company, Starbucks, adopted the siren as it’s now world-famous logo.

“Hans” down, the most famous mermaid in popular culture is from the Danish fairytale The Little Mermaid, originally written as a children’s story by Hans Christian Anderson’s and popularized by the Disney adaptation and creation of Ariel. While mermaids appear in countless fantasy films, novels, and comics, the live-action release of The Little Mermaid is surely to bring mermaids and sirens back into the forefront of popular culture debate.