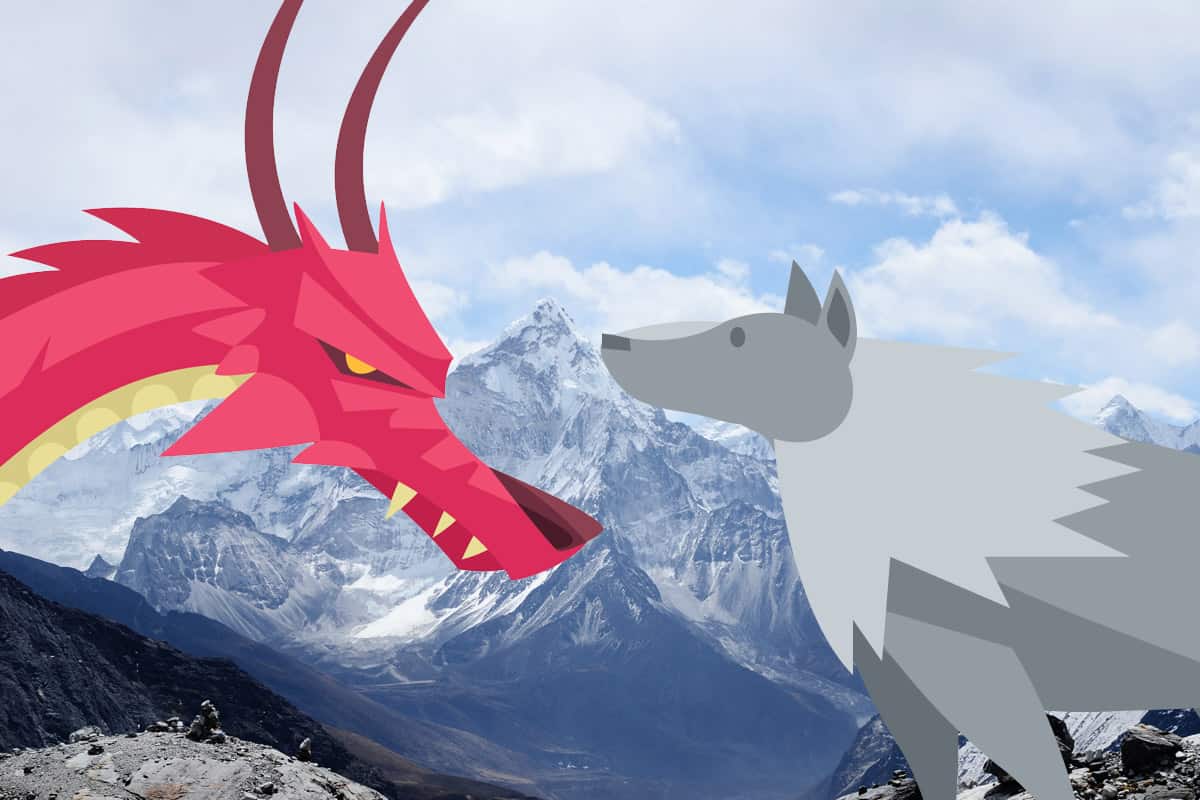 Norse mythology. Full of blood, bone and terrifying creatures that defy scale. Two figureheads for this are the gigantic Fenrir and Jormungandr, but what is the difference between them?

Though their tales begin together, they are remarkably different. Fanrir is a giant black wolf who will swallow the sun and Odin. He hates the gods and is very intelligent. Jormungandr is the gigantic sea serpent so long it is said that he can encircle the world. He is much more secretive and prefers seclusion. Though he joins the battle against the gods, he doesn’t seem to hold ill will towards the gods except for his sole nemesis.

If you’re intrigued by these intimidating creatures and want to know how they are both respected and feared, read on below.

What is the Difference Between Jormungandr and Fenrir, Really?

Fenrir is an enormous wolf with pitch black fur. He is said to be so large that when the day of ragnarok comes, which is the norse end of the world, his bottom jaw will lay across the earth and his upper jaw will be in the sky. In artwork Fenrir is often depicted as a large omnivorous black figure with glowing red or yellow eyes, more often near mountains or forest to gauge the beast’s size as he towers over them. In most artworks he looks as if he is stalking, ready to attack at any moment, but he is also commonly painted in chains or biting off the arm of Tyr.

Jormungandr is a ginormous sea-serpent. In most recordings he is described as a giant serpent, in some, a dragon but all agree that he lives in the depths of the ocean. It is believed that he is so long that he can encircle the world of Midgard. He is depicted as a giant sea-supernt sometimes with dragon-like features. He is often painted as bursting out of the sea with his mouth either wide open or stretched into a sinister grin. Like Fenrir, he is also commonly illustrated with glowing eyes.

You may not know it, but surprisingly regardless of their appearance, both Fenrir and Jormungandr have the same origin. They are in fact brothers. Both the children of the god Loki and the giantess Angrboda. They also have a sister of the same parents by the name of Hel. All three of the children were initially raised in Jotunheimr which was also the land of their mother until Odin found out of their existence. Fenrir was taken to Asgard to be raised by the gods in an attempt to control him while Jormungandr was thrown into the sea in hopes that he would drown.

Fenrir’s abilities lie in his strength, both body and mind. The gods brought him back as a pup but as his size grew rapidly they began to fear if they could control him. Eventually the gods felt they had no choice but to make the difficult decision on his fate. They decided that it would be safest to chain him and no longer let him be free in case he were to ever turn on them or threaten the nine worlds.

Expecting him to have the mind of a beast they decided to trick him. They told him they were playing a game to test his strength and chained him to a boulder. He snapped the chains within seconds. They attempted again with heavier chains but again they were no match to Fenrir’s strength. Desperate, they turned to the dwarves where they crafted the strongest chains ever built.

Though Fenrir’s muscles are incredibly strong, he was also very intelligent. After the first two attempts he had already gauged that the gods may have other, more sinister, intentions. On the third attempt he agreed that he would only do it if a god were to keep their hand in his mouth as collateral. Tyr was the only one brave enough to volunteer knowing the outcome and as suspected, when Fenrir was unable to escape, he ripped off Tyr’s arm.

Jormungandr’s abilities are less known. He did adapt to the water quickly, becoming a sea-serpent. It is understood that he has the ability to breathe underwater. Also, like his brother, the giant sea-serpent is known for his strength and size. This is demonstrated in the many artworks and two encounters, both involving Odin’s son Thor.

It is not known what sparked Thor’s obsession with the beast but he underestimated the serpent. In their first encounter, Loki and Thor were travelling and entered the castle of the giant Utgarda-loki. The giant permitted lodgings for the night on the agreement that they battle with the giants in contests. One contest was where Thor had to lift a cat. To his surprise he failed, only being able to lift his paw. The next day Loki admitted that it was all his illusions, that the cat was actually his son Jormungandr and that he was impressed that he could lift him at all.

The second he attempted to fish Jormungandr out of the sea. Not wishing to go, Jormungandr pulled towards the bottom. In a quick decision to save themselves before they were taken under and start Ragnarok, Hymir, a giant onboard at the time, cut the line, releasing him back to the depths of the sea.

On the day of Ragnarok Fenrir will use both of his strengths. He will break free of the chains and release chaos on the earth. He will swallow the sun causing darkness to spread across the land. It is said that he will lead an army against the gods filled with wolves and werewolves. During the war he will encounter Odin and successfully overpower the king of gods, swallowing him whole. This victory is short lived as the death of the king ignites a fire of wrath in Odin’s son Vidar. Vidar will hunt down Fanrir and slay him with a sword through the heart.

Jormungandr also goes to battle on the day of Ragnarok but for a much different reason. Though he supported his siblings in the war against the gods, he only had one nemesis which was Thor. On that day Jormungandr rises from the sea to fight Thor in the battle against the gods. It is during this fight that Thor and Jormungander slay each other.