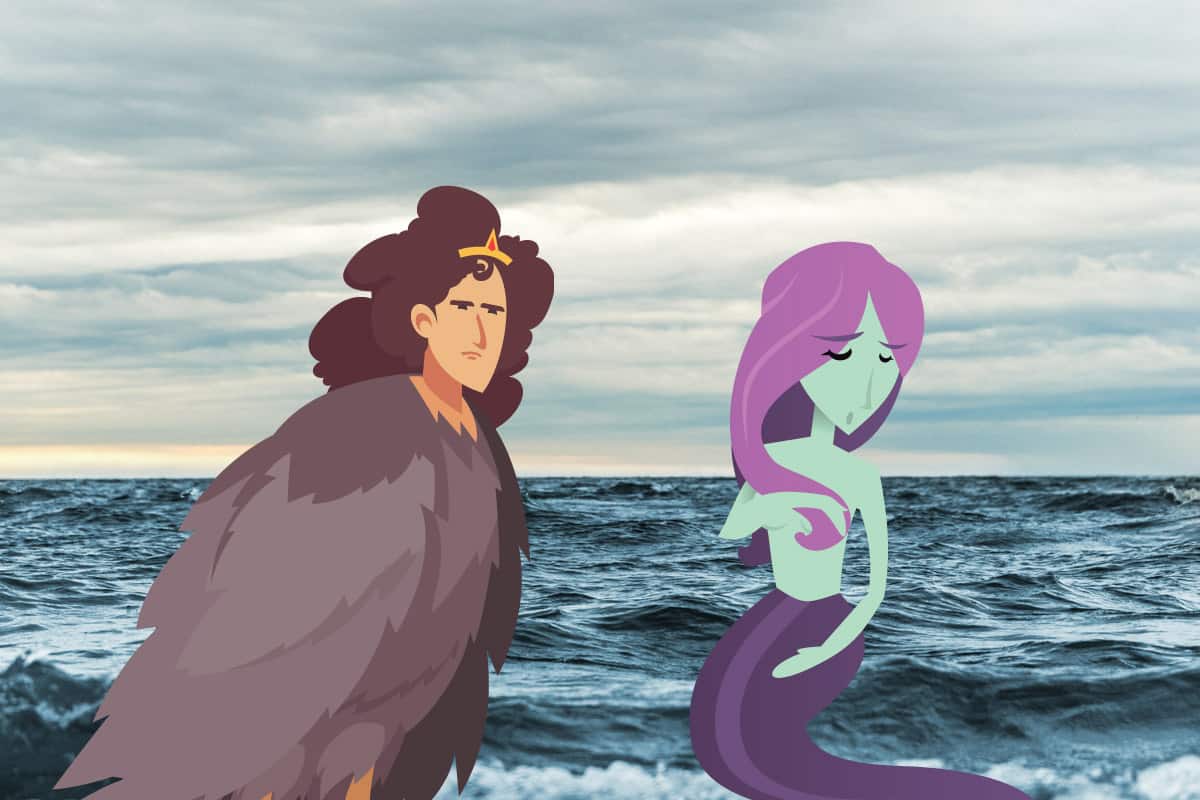 These half-bird, half-woman creatures do share several notable traits. Namely, their primary role seems to be to trick or seduce men to their deaths. But where sirens were thought to be beautiful both in appearance and song, harpies were described as particularly hungry-looking and ugly creatures. Additionally, sirens seemed to hunt for themselves. They served no one. Harpies were once considered the ‘hounds of Zeus’ and would capture their victims only to deliver them to the Furies.

The most important lesson to take from this is to always turn around and run at first sight of either a siren or a harpy. And definitely do not listen to a siren’s song.

What are the Differences Between Sirens and Harpies?

Sirens and harpies are both woman-bird hybrid creatures. Early accounts of sirens show them as being birds in every aspect except their heads which were that of a beautiful woman. Imagery shifted over time to be that of a beautiful woman with long hair and the legs and feet of a bird. In these later depictions, they were shown both with and without wings. And even later, the siren began to cross with that of a mermaid until the two became wholly indistinguishable by the Middle Ages. Sirens are almost always female. Accounts of male sirens do exist but they seem to have disappeared from lore, artwork, and other forms of story sharing by the fifth-century BC.

Ovid may have offered the most graphic description of harpies when he called them ‘human-vultures.’ These creatures typically had wings, the upper body of a woman, and the legs of a bird. Most writers of lore agreed that these creatures were quite ugly, with talons for hands, and a pale face that constantly showed signs of extreme hunger. It was only Hesiod who offered a beautiful description that was far more in line with that of a siren. He described them as ‘harpies of the lovely hair’ and believed they could fly as fast as the wind.

— Not To Be Confused With Mermaids

Now while eventually sirens and mermaid lore seemed to cross, they still should not be confused with mermaids. Mermaids were another hybrid creature with the upper body of a human and the lower body of the male. Stories of them existed in cultures all over the world for centuries before the sirens took on the appearance of mermaids.

Interestingly enough, while there is no evidence mermaids exist or have ever existed, people still report supposed sightings of them every year. Sirens and harpies do not receive such fanfare.

Sirens were amongst the most feared creatures to sailors. They were known for luring sailors to their death. Particularly, they would sing and call the sailors forth with their lovely, hypnotic voices causing the men to shipwreck along the rocky coast of their island. Other accounts suggest they would lull men to sleep with their song and climb onto the boats to kill them. Sirens ultimately became symbolic of promiscuous, lustful, and dangerous women.

Harpies were vengeful creatures and possibly servants of the Furies. The Furies were vengeful, Greeks deities. According to the Iliad, the Furies ‘take vengeance on men, whosoever hath sworn a false oath.’ Harpies would steal people, particularly those who killed their families and deliver them to the waiting hands of the Furies to meet their punishment. They continued to hold such a stance in later literature as well. Dante described the woods surrounding the seventh circle of hell as being infested with ‘repellent harpies’.

It should be noted that getting distracted by a woman was one of the many reasons having a woman aboard a ship was considered bad luck. Harpies and sirens may have been a contributing factor to this superstition and then used to justify both superstition and puritan culture later on.

Sirens and harpies have not only had an influence on old sailing superstition but on the fiction genre and colloquial sayings. Statements like ‘She’s a harpy’ or ‘It was like a siren’s song’ remain in fairly common use.

To describe someone as a harpy is to suggest that they are treacherous and mischievous and will lure you to your demise. To say something is like a siren’s song is to say that it has the allure and pull of dangerous beauty.

In regards to popular culture and contemporary media, harpies and sirens are common characters in fantasy genres. Sirens appear in Lost Girl, a Showcase television show and inspired the poem Siren Song by Margaret Atwood which reflects upon the burden of beauty. Harpies show up in the works of Shakespeare and Dante Alighieri. More modern harpy characters can also be found in the DC comic universe.

The sirens were believed to be a companion of Persephone, the daughter of Demeter. Persephone would eventually be kidnapped and forced into marriage by Hades. In Ovid’s tellings of these myths, Demeter gave the sirens wings to aid her in her desperate search for her daughter.

Another tale puts the music of the sirens at odds with the music of Orpheus. Apollonius Rhodius writes in the Argonautica, an epic Greek poem dating back to the third century BCE, telling the story of Jason and the Golden fleece. Jason had taken Orpheus with him on this adventure after being warned his aid would be needed. As the sailors began to pass by the siren’s domain, Orpheus played his lyre. His music was far more beautiful and managed to drown out their voices, therefore, allowing the ship to continue safely on their journey.

Also told in the Argonautica is the story of King Phineus of Thrace. Being one of the many people to anger Zeus, he was also one of the many people to feel his wrath and experience his progressively creative ways to punish people. Zeus blinded King Phineus and banished him to an island infested by harpies. With plenty of food to eat, King Thrace would forever be hungry as the harpies would steal the food, often directly from his hand, before he ever had a chance to eat it. This went on until Jason and the Argonauts came to his rescue in exchange for guidance for their mission.