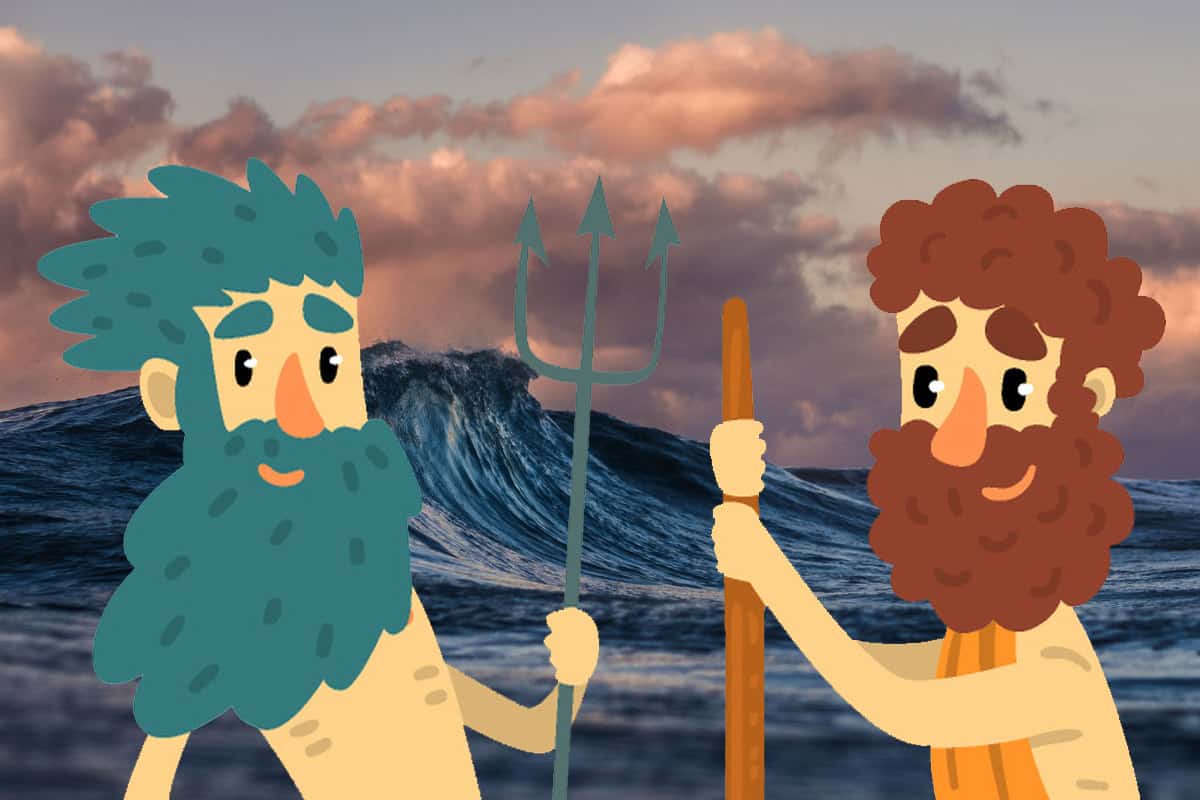 Both Poseidon and Pontus were Greek gods of the sea. While Poseidon is considerably more famous, Pontus (or Pontos) was the primordial personification of the sea.

Poseidon was the ruler of the sea, while Pontus was the very embodiment of it. Like Poseidon, Pontus was often overshadowed by his brother – Zeus for Poseidon, and Oceanus for Pontus. However, while Poseidon and Zeus ruled over different divisions of the world, Pontus’s role was often entirely eclipsed by that of Oceanus.Pontus was not a particularly active god. He was more of a primordial being who served to sire  many of the later gods and monsters. Poseidon, however, interacted very closely with humanity and his power over the ocean was only one part of his strength and fame.

What’s the difference between Poseidon and Pontus?

Poseidon was the son of Cronus and Rhea, the Titans. He was a brother to Zeus, King of the Gods, Hades, Hestia, Demeter, and Hera.

He was married to the goddess Amphitrite, who was a granddaughter of Pontus. He had several lovers, both men, and women, including the goddesses Aphrodite and Demeter, as well as his brother-in-law Nerites. He had a plethora of offspring, both with goddesses and mortals.

Amphitrite bore him Triton, Benthesikyme, and Rhodos, even though in some accounts Aphrodite is considered the mother of Rhodos. Other famous children of his include the cyclops Polyphemus, the hunter Orion, and the winged horse Pegasus.

Pontus was the child of Gaia and usually had no father, though sometimes it was Aether. He fathered all the creatures of the sea.

His mother Gaia was his consort, and they produced Nereus (the Old Man of the Sea and father of Amphitrite), Thaumas, Phorcys, Eurybia, and Ceto. His female counterpart Thalassa was the mother of all of his other children, including the Telchines, who inhabited Rhodes, and all sea creatures.

Pontus’s children Ceto and Phorcys married one another, and their children included Gorgon, Echidna, Thoosa, Ladon, and the Hespirides.
Pontus’s siblings were Oceanus and Tethys, who also married.

Most of Poseidon’s myths have to do with his conquests and rivalries. The first role he ever played in the myths is that of Zeus’s ally, where he assisted him with leading the war against the Titans. After the Titan’s defeat, Poseidon was given the realm of the sea to rule over.

He fell in love with the nereid Amphitrite at first sight. She was dancing with her sisters at Naxos, and Poseidon loved her immediately. Some versions report that he won her affections, but there are others that report that Amphitrite fled from him. In the latter, Poseidon is said to have sent a dolphin after the nereid to convince her to marry him, and she agreed to be his queen. As a reward, the dolphin was made a constellation.

Perhaps one of his most well-known rivalries was that with Athena. The two gods both wished to become the patron god of what came to be known as the city of Athens. When the people asked the gods, what each would bring as their patron god, Poseidon used his trident to strike the ground and created a fountain of saltwater. The mortals, though, eventually preferred Athena’s gift, which was the olive tree, and made her their patron.

Poseidon was very angered by this and attempted to block all exits and entrances of the city with rocks in a show of temper and pettiness. Not only that, but he also sent water to flood the Attic Plain to prove to the humans that they made the wrong choice.

Poseidon also seduced or forced Medusa on the floor of a temple of Athena, in another display of pettiness. Athena, instead of punishing Poseidon, chose to punish Medusa as well as her sisters Stheno and Euryale by transforming them into the Gorgons, monsters with horrid visages, and living snakes on their heads.

After Perseus beheaded Medusa, Poseidon’s children, Pegasus and Chrysaor, sprung from her neck.

Though he personified the sea, there are not many direct myths about Pontus. Art tends to favor his brother Oceanus or Pontus’s lover and female counterpart Thalassa. However, Pontus’s children played very significant roles in Greek myth, and Pontus’s lineage was directly tied to Poseidon through his eldest granddaughter, Amphitrite, as well as his other grandchild, Gorgon.

Thaumus married Pontus’s niece Electra, and the two produced Iris, messenger of the gods, Arke, messenger of the Titans, and the Harpies.
His daughter Eurybia was known to have a heart of flint. While her brothers and sisters personified different aspects of the sea, she was known for her strength and mastery of elements related to it, including wind, storms, and other oceanic phenomena. Eurybia was a relatively minor goddess, but like her father before her she played an important role through her lineage – most specifically through her children by the Titan Crius.

In Roman mythology, Pontus was often depicted with Fortuna (the Roman equivalent of Tyche, goddess of fortune and luck over cities). The two were the patron deities of the Black Sea. In the original Greek mythology, Tyche was the daughter of either Aphrodite or Pontus’s sisterTethys. When her mother was Aphrodite, her father was either Zeus or Hermes. When she was the daughter of Tethys, her father was Tethys’s husband and brother, Oceanus.

Poseidon and Pontus represent very different aspects of the vast sea – the place that makes up the majority of Earth, and yet we know so little about even today. Pontus and his counterpart Thalassa existed as primordial incarnations of its existence and a way to explain its abundance.

Poseidon, meanwhile, was not a representation of the sea but a ruler of it. This symbolized the Olympian’s power over the world.