Skip to content
Home » Leprechauns vs Elves: What is the Difference? 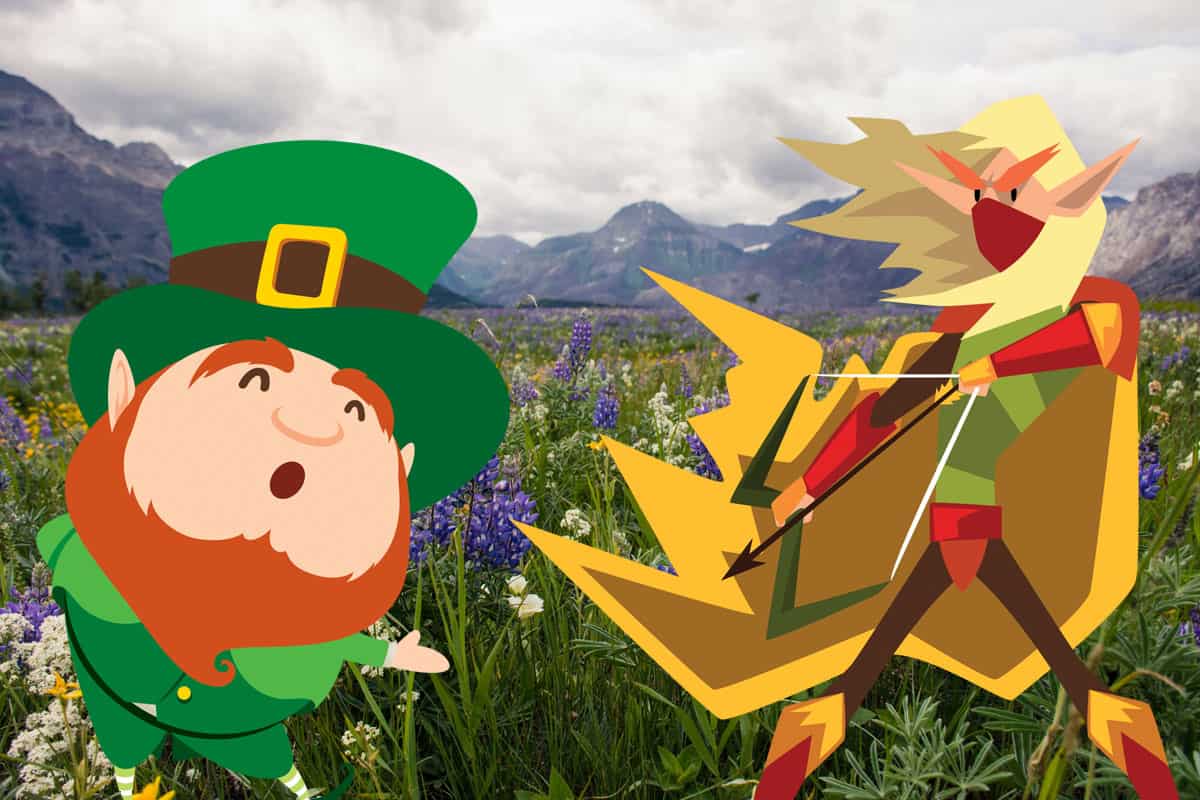 For many, interests in high fantasy, mythology, and folklore stem from the childhood pleasure of staying up late with a flashlight and book of elves and fairies, dwarves and dragons, beasts and heroes to get lost in. Or maybe it stemmed from movies like Harry Potter or Lord of the Rings. Nonetheless, anyone who is introduced to creatures of myth and legend as a child often has elves and leprechauns as some of their earliest creatures to explore.

Volatile, devious, mischievous, and potentially a nuisance or help to humans. Elves and leprechauns share many characteristics but have different origins, primary stories, and roles within mythology and folklore. Leprechauns are exclusive to Irish lore and mythology while the lore around elves ranges through Scandinavia, Germany, Scotland, England, and Iceland. Leprechaun stories have remained relatively stable throughout history with the exception of a sudden change likely in response to immigration and the influence of Irish culture in America. Elven stories, on the other hand, have evolved over time and with notable modern influence from J.R.R Tolkien when he published The Lord of the Rings.

Regardless of their origin, both leprechauns and elves are probably best left in their peace. Humans who failed to do so often pay the price in their wealth, their health, and more.

So, What is the Difference Between a Leprechauns and an Elf?

There are few things more closely associated with the Irish than leprechauns are. Leprechaun stories date back as early as the 8th century. They do not have a specific origin story but the folklorist David Russell McAnally does suggest that these creatures are sons of an evil spirit or “degenerate fairy.” It’s believed they were the cobblers of the fairy world who happened to have a knack for acquiring wealth.

They would spend their days mending and making shoes or protecting their treasure at the end of the rainbow. There are no female leprechauns and the lore doesn’t quite explain how they reproduce. There is one tale that suggests that leprechauns are the unwanted sons of other fairies which would explain the lack of gender variety.

Elves take their origin in Germanic folklore. The Germanics were a group of ancient and early medieval people living in what is now Scandinavia and North/Central Europe and includes the Norwegian pantheon. The earliest known mention of elves belongs to Angelo-Saxon England medical texts that attributed a large variety of illnesses and impairments to elves.

Other myths suggested they were the cause of nightmares and bad dreams. At this time, the term elf may have been used for any particularly small but human-like spirit. Over the years, distinctions were made to separate elves from other mythological beings.

Leprechauns are typically presented as being rather small creatures, standing only a few inches tall. In addition to their small stature, early accounts of leprechauns depict them wearing red suits with multi-cornered hats. With time that image shifted to them sporting a rather impressive beard and a green suit or leather apron. Believed to be solitary creatures, they lived in the countryside and evaded capture by humans seeking the treasure they protected.

According to Scandinavian lore, elves are depicted as being tall, slender and impossibly beautiful creatures with angelic features and pointed ears. Other accounts stemming from Angelo-Saxon England hold them as being much like leprechauns. They were small, human-like, prone to living in the woods or countryside, and rather elusive. Unlike leprechauns who belong exclusively to Irish mythology, elves are depicted differently across their various origin countries.

Leprechaun myths typically follow the same structure. A human manages to capture a solitude-loving leprechaun that was mostly minding his own business. In exchange for his freedom, the leprechaun either grants three wishes or discloses the location of his treasure depending on the story. This never really ends well for the human as he is either out-witted before he can get to the treasure or regrets his wishes quickly due to the fickle, mischievous, and devious magic leprechauns possess. The human is left to confront his greed and ignorance in thinking he could outwit a leprechaun for a bit of gold.

There is one story that suggests that leprechauns will reward kindness. According to this tale, a king, whose kingdom had fallen into poverty, came upon a leprechaun one day and offered to give him a ride home on his horse. After leaving the leprechaun, the king road home and found his castle had been filled with gold from the floor to the ceiling. Maybe there’s something to be said for kindness leading to wealth.

Like leprechauns, the stories of elves seem to hold stable themes. In many stories, elves are rather ambivalent towards humans but will retaliate if provoked. When provoked they will cause illness to the person or his cattle, sit on his chest at night to cause bad dreams, or even steal their children and replace it with a changeling. Also like leprechauns, there are quite a few stories of them being helpful by healing an injury or curing an illness after being treated with kindness.

Leprechauns are often seen as symbolic of luck and wealth. Now they are also a symbol of Saint Patrick’s Day. Contrary to popular belief, they do not take their claim to fame Saint Patrick’s Day. In fact, both the holiday and the small fae-creature existed independently for ages before ever becoming associated with each other.

Elves are symbols of magic and nature. In fact, some myths suggest that an elf’s lifeforce is intricately attached to that of a specific tree. Should the tree be felled, the elf would also perish. Within contemporary fiction and the high-fantasy genre, elves are also symbolic of arrogance and pride. As seen in J.R.R. Tolkein’s Lord of the Rings, an elf’s arrogance and pride is often the result of their downfall.

Maybe the most famous example of the leprechaun is the green, cartoon character that graces the General Mills cereal Lucky Charms. Barring that, they lay their claim as the mascot of Notre Dame University and symbols of Saint Patrick’s Day. Leprechaun seekers can find them in movies and books like the 1959 Disney film Darby and the Little People or the 2001 Disney Channel movie The Luck of the Irish. Even the horror genre has utilised the leprechaun as seen in the 1993 film Leprechauns starring Jennifer Anniston.

The first elves children seem to be introduced to today belong firstly to Santa Clause. They are seen as Santa’s helpers and support the process of making the magic of Christmas happen. This presentation was likely inspired by Grimm’s fairy tale, The Elves and the Shoemaker. The second introduction is from J.R.R. Tolkein’s Lord of the Rings and The Hobbit which continue to define the high fantasy genre and the common public image of elves. Another contemporary example includes The Witcher series by Polish author Andrzej Sapkowski. In this series, elves are similar in appearance to those in Middle Earth with high pointed features and ears. They are one kind of magical species that live in Sapkowski’s fictional world and are becoming more famous since Netflix began a series based on the novels.